The ProStar and ProCylinder Aquariums will have their prices RAISED this Saturday 01/23/21. Click Here for more info

Aquariums can Act as a Partial Treatment for Medical Conditions In addition to helping with generalized issues, aquarium viewing can actually help partially treat a number of diagnosed medical conditions.

One such case is found in a National Marine Aquarium study (Cracknell, White, Pahl). Aquariums' benefits of reducing stress and anxiety as well as blood pressure and heart rate are exemplified when visitors viewing a large aquarium restocking were tested before and after viewing. Significant improvements in all of these areas were consistently seen in almost every participant after only a few moments of viewing.

One of the lead researchers of the study, Dr. Mathew White, talks about these benefits of aquariums when he proposes, “For example, if we were to put a live (video) link into Derriford (the local hospital) into waiting rooms or even into some of the wards and we could show clinically meaningful reductions in heart rate and blood pressure among specific groups, such as hypertension for example, it could be really important for medical reasons.”

The final case is rather interesting (Edwards and Beck). This study examined the effects of aquarium viewing on patients with Alzheimer's disease, a disease characterized by loss of memory and other brain functions. A popular quote which is referenced on the first page of Edwards and Beck's study shows the widespread severity of Alzheimer's disease by stating that it, "affects 1 in 10 people at age 65 and nearly half of all people age 85 and over" (Hingley & Ruggeri, 1998).

The researchers were surprised to find a very significant increase in appetite (~21.1%) after the tanks had only been in place for a week, and following weight gain averaging 1.65 pounds per patient. While far from a cure, this is a fantastic step in the treatment of patients with Alzheimer's or similar conditions!

The Proof is in the Result

So...late one night I was shopping online for a new seahorse tank. I ended up on the Two Tides website & in the bottom corner it said to click for a live chat. Since it was after midnight & they’re in the same time zone, I thought no way. But I clicked anyway & sure enough I was chatting with a live person! We chatted for over an hour until he asked for my email address telling me I’d be contacted the next day. That’s when I met Tyler. He helped me with my purchase. He went above & beyond to get me the tank I wanted, even spending a day on a video chat with Pro Clear Aquatics as they searched their warehouse looking for the aquarium I wanted with a blue back. They stopped making these a while back but they found one for me! I absolutely love this aquarium & I can honestly say that Tyler provided THE best customer service I have ever experienced from an online vendor. He told me from the start that he would stay with me from start to finish & he did. He was always there to promptly answer any questions or concerns I had. I can’t say enough about how happy I am with my purchase! 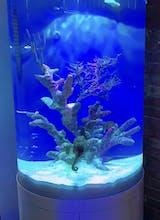 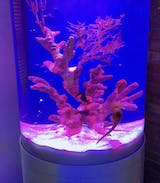 I was looking for rimless peninsula aquarium to upgrade my 80 Gallon and my 70 Gallon mixed coral reef this year, but had a really hard time finding it because of the coronavirus. So I purchased a ProStar 230 Peninsula from Two Tides and I’m glad I made the right choice. The 3/4” low Iron glass display tank and large glass sump and light weight white stand is just beautiful as a piece of art. Tyler is extremely helpful and responsive and made the process easy and stress free. Everything arrived very well packaged. When we were setting up the tank, we couldn’t believe how easy the setup was with no issues what so ever. If you are looking for a high quality aquarium I highly recommend this company. 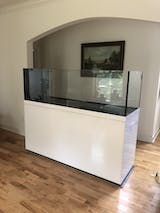 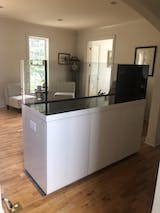 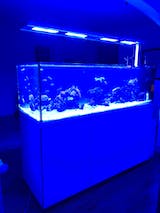 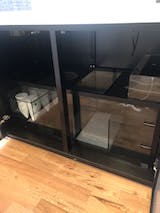 I am very happy with my order. The tank is very beautiful of out the box and it was well packaging with feel very safe from shipping damage.

Custom services from Two Tides Aquarium Supply was excellent. I have communicated with Tyler who had assisted me throughout the process from ordering the tank through shipping process, and what to expect on delivery day.

I am highly recommend anyone who want to get a new aquarium, to purchase from Two Tides Aquarium. Best to look for Tyler, he is a very helpful and pleasing person to contact if you have any question. I am glad that I have met him and definitely I would buy again in the future from Two Tides Aquarium supply when I need another fish tank and any other aquarium supply that I may need.

Thank you very much for a beautiful tank.

I am very pleased with not only the product I received but the service that came with it. Tyler was in constant contact with me throughout each stage of the process. He answered all questions I had and was even able to provide me with links to plumbing parts I needed for the build. We had a small hiccup with shipping (carrier's fault not Two Tides) but Tyler was able to update me throughout the day. Tyler genuinely cares about his customers and I would recommend the company to anyone looking for their next show room tank!

Makes water quickly. Very happy with the unit so far. Pump is quiet, runs great. Finally decided to get a good rodi system. This one has exceeded my expectations way better then any other unit that I've had before. TwoTides Aquarium supply shipped it fast and couldn't be happier with this unit.